“Go into all the world and preach the gospel …” Jesus said. He gave authority to his apostles to preach the gospel, to heal the sick, and to cast out demons. These Powers his prayer is pure heart, faith received millions arputar St. Antony less listeners, and nampikkaiyotu requests by his intercession to God interceding “Holy earth spread around the disciples of Jesus in the way iraittutaray land in the avatarittu

Thanjavur District St. Anthony’s Correction on the way from Thanjavur to Pattukottai Diocese of Thanjavur, Weerakkurichi – Sukrampatti The golden pedestal has been moved, and in the midst of them St. Anthony’s Coronation is receiving the Divine for those who seek/believe in it.

a) St. Anthony, also known as Crore Wonder, was born in Lisbon, the capital of Portugal, Europe in AD. He was born on August 2, 1195, on the feast day of Marianne. His father, Matt Dibion, was governor of the city of Lisbon. His mother was Thevara Therasammal.

d) The death of St. Francis of Assisi in 1225 AD had a great impact on the life of St. Anthony. Then came Italy from France. It was while he was speaking here that the baby Jesus crawled into his arms and played.

e) AD. In 1227 he became general manager of the Franciscan church and traveled to Rome. Meets the amendment. He spent his last days in Padua, Italy. AD The Lord called him on June 13, 1231. He was cremated on June 17th.

f) The Lord has given him the gift of miracles because he spent most of his 36 years of worldly life in evangelism and evangelism.

Shortly after his death, many prayed to St. Anthony of Padua. His recommendation led to complete bliss and innovation when the need arose. His tongue did not die when the church then took his body out of the tomb. It is still the same today. So AD. He was canonized on May 30, 1232, and ordained on January 16, 1946. 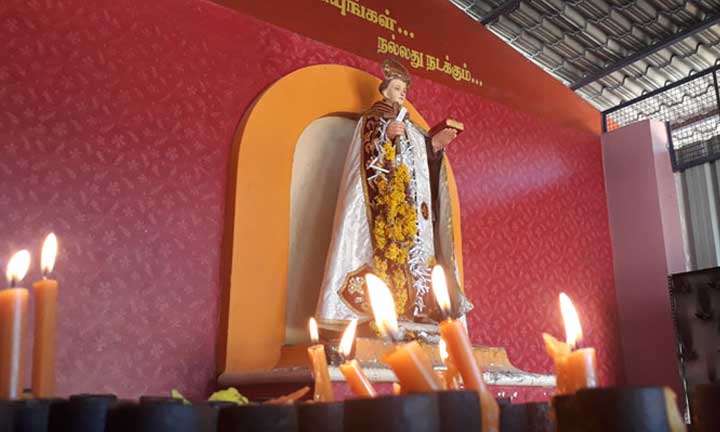 St. Anthony (innovations made during his lifetime)

1. Satan was cast out by the power of the sign of the cross.

2. It was a surprise that the wall of the temple stood two feet away to worship the presence of the Merciful Lord.

3. He put his hat on the patient’s head. The patient was healed by a miracle.

4. Survived innovatively from the storm.

5. Adonier became a force to be reckoned with.

7. The resurrection of the dead.

8. It is wonderful to be with the body in two places at the same time.

9. The surprise that Mother Mary made clear to St. Adonijah the mysticism with which the Virgin was taken with the body and soul.

10. The broken vessel is glued.

11. Kneeling in front of the neck of grace.

12. The people and the saints did not get wet in the rain while reciting the prophecy to the people.

13. St. Anthony sat on his hand and spoke to the wonderful baby Jesus.

After his death, he became known as Cody Wonder because of his gift of understanding innovations.

The nearest airport is Tiruchirappalli Airport which is (100.8 Kms) from Thanjavur

The nearest railway station is Thanjavur Railway Station which is (41.9 Kms) from Veerakurichi temple