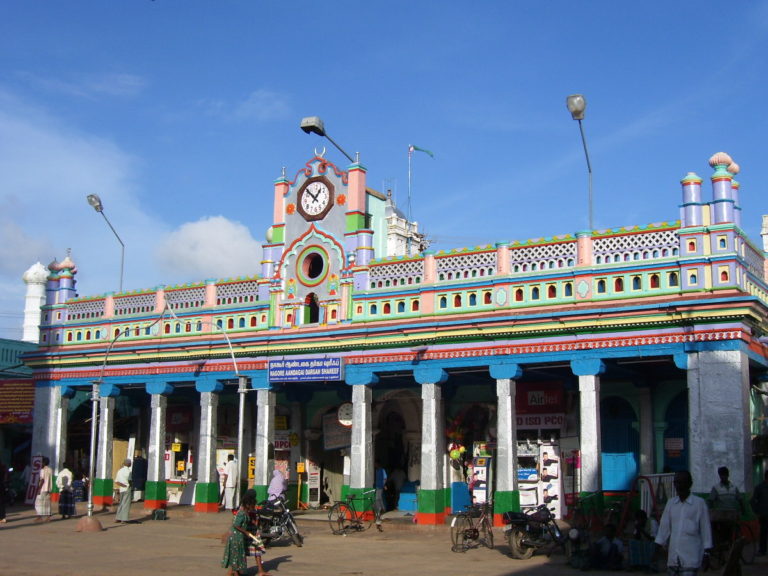 Nagore Dargah also called Nagoor Dargah or Hazrat Syed Shahul Hameed Dargah is a dargah built over the tomb of the Sufi a saint Hazrath Nagore Shahul Hamid (1490 – 1579 CE). It is located in Nagore, a coastal town in the South Indian state of Tamil Nadu. Outer doors kept open always. Internal doors opening time is from 04:30 am to 07:00 am and 06:25 pm to 09:30 pm. Friday alone additionally kept open from 12.00 pm to 02:30 pm also. Shahul Hamid is believed to have performed many miracles in Nagore, and cured the physical affliction of king Achutappa Nayak, a 16th – Century Hindu ruler of Thanjavur. He is locally referred to as Nagore Andavar, meaning the “God of Nagore”. Nagore dargah as it stands now, is believed to have been built by ardent devotees of Shahul Hamid, with major contribution from Hindus. There are five minarets in the dargah, with the Hindu Maratha ruler of Thanjavur Pratap Singh (1739 – 1763 CE), building the tallest minaret. The dargah is a major pilgrimage centre that attracts pilgrims from both Islam and Hinduism, symbolizing peaceful coexistence between the two religions.

The most prominent event celebrated at Nagore dargah is the Kanduri festival, a fourteen-day commemoration of the death anniversary of Shahul Hamid. Common worship practices at Nagore dargah include the presentation of offerings, accompanied by the playing of musical instruments like nadaswaram, atypical of Hindu religious tradition. The Shifa Gunta, a pool within the precincts of the dargah, is considered sacred; pilgrims take a holy dip in it. The hereditary Khalifa (Sufi saint), selected from among the descendants of saint Yusuf, performs all the official and religious duties of the dargah. The administration and maintenance of the dargah is governed by a committee which operates under a scheme decreed by the Madras High Court. 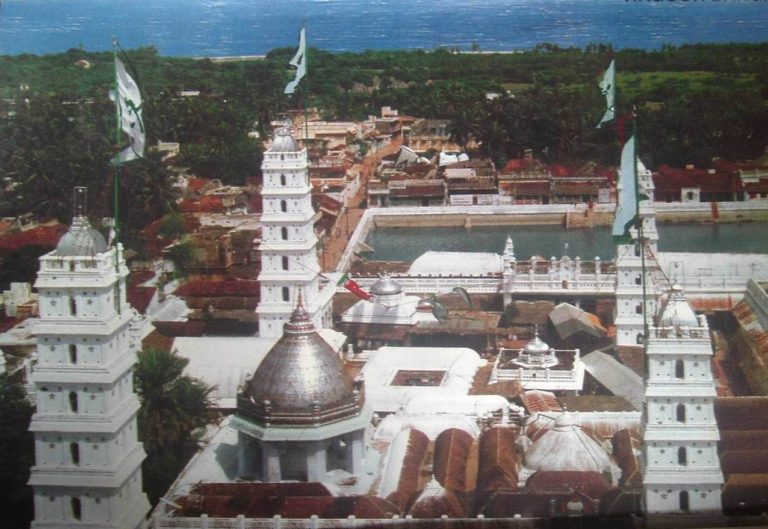 Achutappa Nayak, the king of Thanjavur during the 16th century, donated 200 acres (81 ha) of land to the entourage of Shahul, after the saint cured the king’s affliction. The dargah was built on a part of the land donated by Nayak. Shahul Hamid is believed to have predicted his death and advised his adopted son Yusuf about his burial location and rites to be performed after his death.

Yusuf performed the rites as per the instructions and decided to stay there for the rest of his life. A mausoleum was constructed over the grave. Devotees of Shahul, who continued to believe in his powers after his death, venerated the site of the burial. The shrine was initially a smaller one and gradually gained prominence.

Pratap Singh (1739 – 1763 A.D.) the Hindu Maratha ruler of Thanjavur prayed for a son and built the tallest of the five minarets called Periya Manara locally with a height of 131 ft (40 m) once his wish was fulfilled.

The Marathas of the later period were patrons to the dargah, with the Maratha king Thuljaji, the son of Pratap Singh, donating 4,000 acres (1,600 ha) of agricultural land to the dargah. During the last quarter of 18th century, when there was conflict between European powers, the Nawab of Arcot, the Maratha kings and Tipu Sultan of Mysore over Thanjavur region, the dargah was considered strategically important by all of them.

Hazrath Shahul Hamid Badusha Kaadiri was born to Hazrath Syed Hassan Kuthos Baba Kaadiri and Bibi Fathima at Manikpur, in Pratapgarh district of Uttar Pradesh. He was a 13th generation descendant of the renowned Sufi saint, Hazrath Muhiyudin Abd al-Qadir al-Jalani. He had his Islamic education at Gwalior under the guidance of Hazrat Mohammad Ghouse. He left on a pilgrimage to Mecca and then moved to Maldives, Sri Lanka and Tamil Nadu with his spiritual team.

He is believed to have led a simple and pious life, performing a lot of miracles, giving him the name Nagore Andavar (meaning god of Nagore). His popularity grew outside Tanjore region during the period. He was also called Meera Saheb, Qadir Wali and Ganj-e-Sawai. 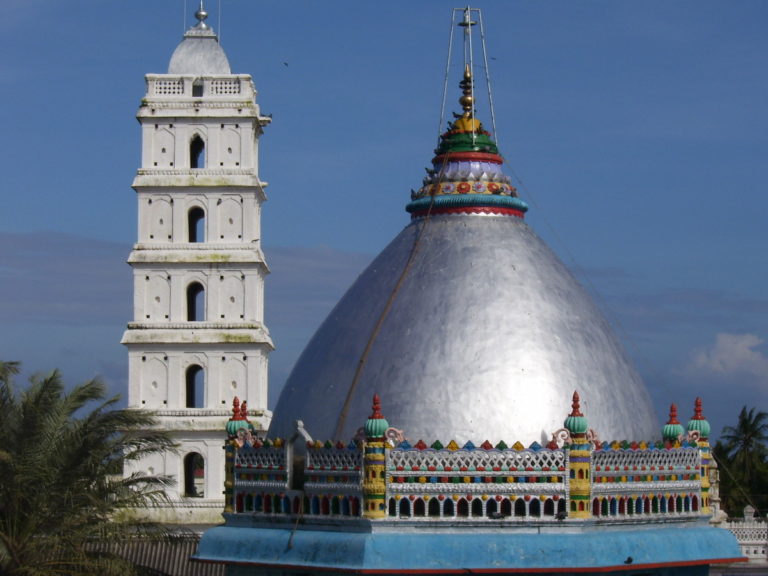 As per local legend, hagiographical texts and historical records, Shahul Hamid is believed to have cured a Hindu ruler of Thanjavur, king Achutappa Nayak (1529 – 1542 A.D.) of his physical affliction caused by sorcery. Shahul Hamid found a needled pigeon in the palace believed to be the cause of the misery. He removed the pins from the pigeon, resulting in the king’s health improvement. In remembrance of the event, the practice of setting pigeons free in the premises of the dargah is continued by worshipers in modern times. 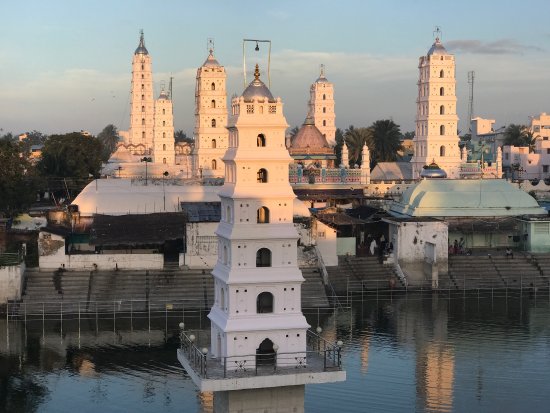 The Nagore Dargah covers an area of 5 acres (2.0 ha) enclosed by a compound wall. The main complex has four entrances in each direction. The dargah is believed to have been built by ardent devotees of Shahul Hamid, who are 60 per cent Hindus.

There are five minarets with different heights and the tallest one has a height of 131 ft (40 m). It was erected during the 195th death anniversary of Shahul. The dargah has a gold-plated dome located on the west face outside the main entrance over the tombs of Shahul, his son Yusuf and his daughter-in-law Saeeda Sultana Biwi.

The other four minarets are 77 ft (23 m) tall Sahib Minara, 93.5 ft (28.5 m) tall Thalaimattu Minara, 93.25 ft (28.42 m) tall Muthubaq Minara and 80 ft (24 m) tall Ottu Minara, each constructed in four cardinal points around the dome. As a mark of respect, devotees venerate the sandals of the saint which are preserved in the shrine.

The central part of the dargah is the tomb of the saint Shahul Hamid, which is approached through seven thresholds. Four of these doorways are made of silver and the remaining three of gold. The other tombs in the shrines are the ones for Shahul’s grandson Hassan Alaihis Salam and Abdel Khader Gilani, each located in different chambers. The adjoining portion of the complex is called Peer Mandap, the Trusty’s place of fasting during the annual festival. A mosque is located next to the Peer Mandap, where daily prayers are offered.

Shifa Gunta is a holy tank with stepped sides, located within the precincts of the dargah. As per a local legend, Shahul Hamid is believed to have brought an iron chain with him to Nagore to bind himself during severe austerities. The distinctive chain is identified as the one hanging from the ceiling above the tomb of Yusuf. Vanjur shrine and Silladi shrine, located outside the main complex, are associated with the Nagore Dargah. The Vanjur shrine is an underground cave located 2 km (1.2 mi) north of the main complex at Nagore. It is the place where Shahul is believed to have meditated for 40 days. Silladi shrine is located 1 km (0.62 mi) towards the east of main complex, facing the Bay of Bengal, where Shahul is believed to have offered daily prayers.

There are similar shrines built in Shahul Hamid’s honour in Penang (Malaysia) and Singapore. The Singapore dargah, built during 1827, has been declared a national monument. These two shrines along with the Masjid Jamae at Chulia in Singapore and the Keramat Data Koya in Penang are influenced by the architectural style of Nagore dargah.

Nagore dargah is a common place of worship for devotees of various religious faiths. According to the administration of the dargah, about 50–75 per cent of pilgrims visiting the dargah everyday are Hindus. The practise of offering flowers, sweatmeats and food, the way of conducting worship, and playing musical instruments like nadaswaram (a type of pipe instrument commonly used in Tamil Nadu) are atypical of Hindu tradition. Other worship practises include offering flags and lighting lamps of ghee at the saint’s tomb. Devotees shave their heads near the tank and offer tin or silver-plated facsimiles of body parts, houses, sailboats matching their material needs.

Since Shahul Hamid was a celibate, he is offered a Sehra (head dress), and not the customary flowers as at other dargahs. As per a local legend, he was approached by a childless couple who informed them that they would be blessed with children but the first offspring would be presented to him to adopt. Following the tradition, many childless couple worship in the dargah. While the dargah is open throughout the day, the doors of the shrines are open only during early morning and evening. 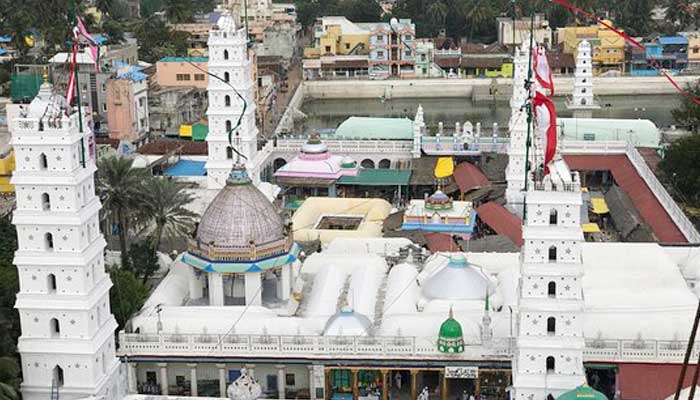 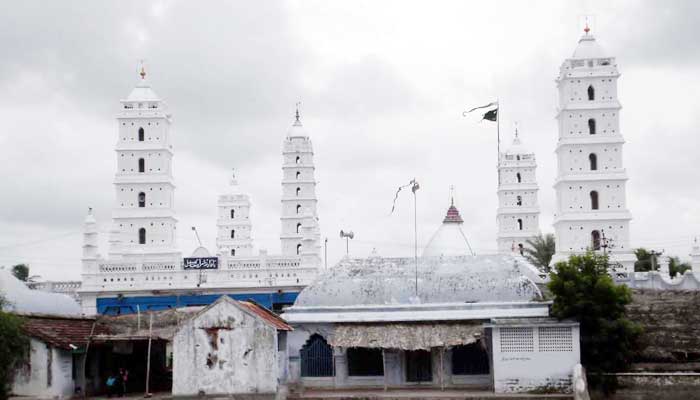 Shifa Gunta, the tank within the precincts of the dargah, is considered sacred. It is believed that a dip in the tank cures physical ailments. There is a hereditary Khalifa, from among the descendants of saint Yusuf. He performs all the religious duties of the dargah. A central parliamentary committee deputed to verify the implementation of the Wakf Act of 1995 was informed in 2008 that the Nagore Dargah was not administered as per the provisions of the Act. The committee found that it is against the spirit of the provisions of the Act as the dargah is a surveyed and notified body under the Tamil Nadu Wakf board. The administration and maintenance of the dargah was henceforth governed by a committee which operates under a scheme decreed by the Madras High Court.

Kanduri festival is a 14-day annual event celebrated during the urs (death anniversary) of the saint. The festival is celebrated in commemoration of the anniversary of the saint’s death, and pilgrims participate in the rituals and rites. The word kanduri is derived from the Persian word for table cloth. The festival is also called Qadir Wali Ke Fande festival. A saffron flag-carrying ceremony is also observed, during which a flag is carried from a devotee’s house to the dargah, accompanied by a procession in streets. 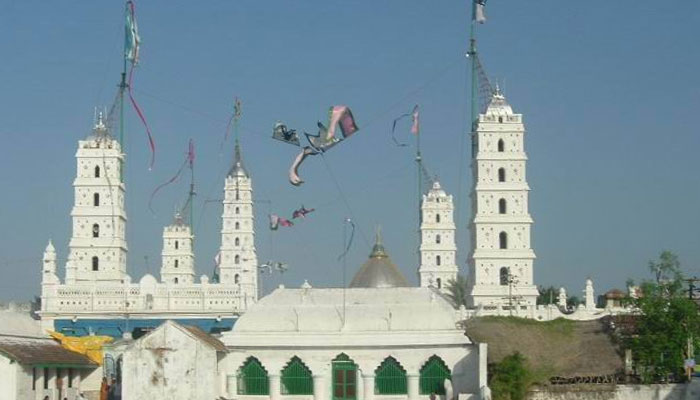 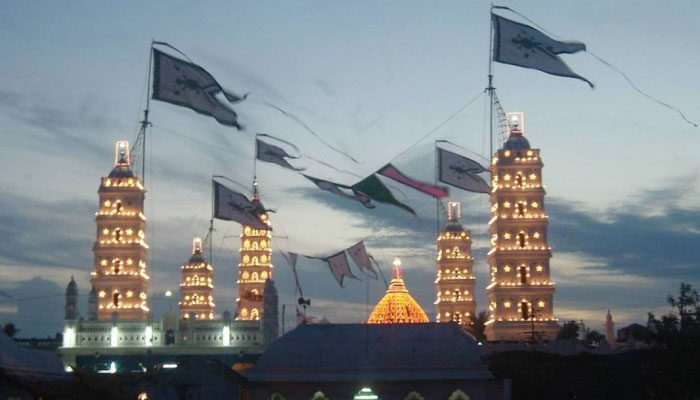 The festival is also seen as a sacred exchange between Hindus and Muslims expressing solidarity of mixed faith in the region. Pilgrims from both the religions from the state and also from Sri Lanka, Burma and Gulf countries, attend the festival. In the evening of the ninth day of Akhir month in the Islamic calendar, a chariot containing sandal paste (locally called santhanakoodu) is pulled across the streets of Nagore by pilgrims and devotees, accompanied by banging of instruments. The sandal paste is received by the saint’s descendants and used to anoint the Rowla Sharif (sanctum) of the saint by the Khalifa of the dargah.

The nearest airport is Tiruchirappalli Airport which is (146 Kms) from Nagore Dargah.