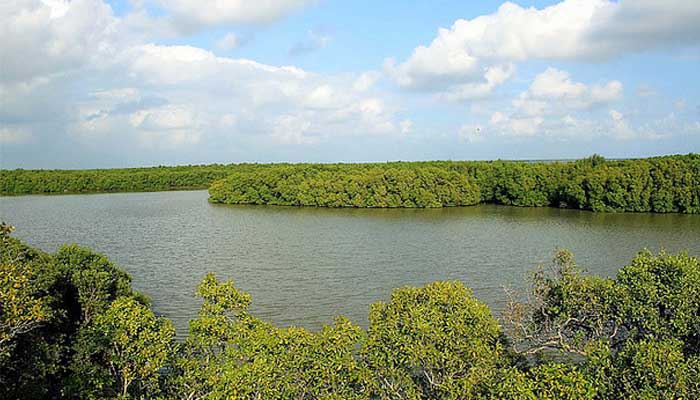 Muthupet a town in Tiruvarur District, located between Thiruthuraipoondi and Pattukkottai, is nearly around 360km away. The town lies adjacent to the Bay of Bengal and is in the southernmost part of the Cauvery delta. This town is bounded by two rivers Korayar and Pamaniyar, to the east and the west respectively. The rivers Koriayar and Pamaniyar join near Muthupet, and there is this lagoon.

This lagoon covers an area of approximately 6,803.01 ha of which only 4% is occupied by well-grown mangroves. The rivers Paminiyar, Koraiyar, Kilaithankiyar Marakkakoraiyar and other tributaries of the river Cauvery flow through Muthupet and adjacent villages. At the tail end, they form a lagoon before meeting the sea.

The lagoon is rich in Fish and is an ideal place for fishing, pearl hunting and bird hunting. It is well known for its fishing industries such as finfish (koduva), shrimp and crab. The great Vedaranyam swamp is one of the largest coastal wetlands found in the state of Tamil Nadu. It is located in the southernmost end of the Cauvery delta, extending from Adirampattinam in the west (Thanjavur District) to Point Calimere in the east (Nagapattinam District). The Muthupet mangrove wetland is a part of the Great Vedaranyam swamp.

The marshy land in Muthupettai is the main tourist attraction in this area. This scenic spot is always evergreen with mangrove forest trees, in a sprawling area of 120 square kms. It is a wonderful sight for the tourists to see the wide expanse of backwater and the mangrove forests dotting over the entire area.

Along with the deep-rooted mangrove trees the other kinds of trees like Thandal, Thillai, Narikanthal and Neermulli also grow and add to the beauty of the lagoon. This lagoon has seventy-three colourful varieties of fish. Tourists can reach the Thalaimunai Mangrove Forest in a motorboat. It is an hour’s from the Jambavanodai point near Muthupettai. 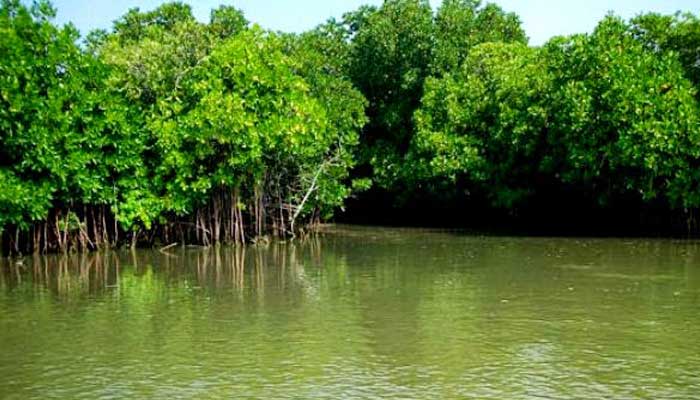 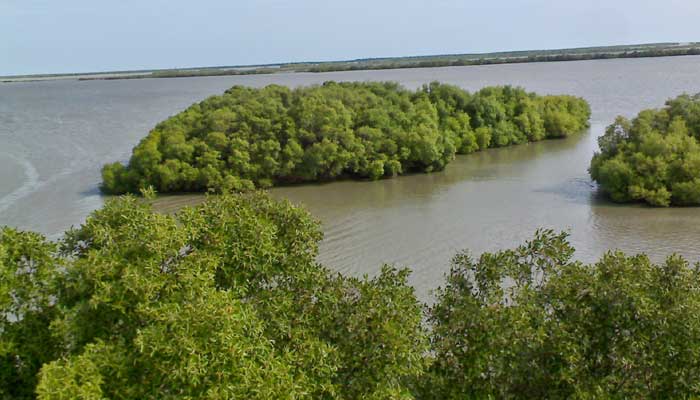 A wooden pathway 162 metres long has been built for the benefit of the tourists to enjoying the mangrove forest. During the monsoon season November-January, a large number of birds migrate here from all over the World. Eighty different species of migratory birds congregate here having travelled a long distances.

The birds come from Siberia, Russia, Iran, and Europe. Among them the notable species of birds are the heron, egret, flamingo, the painted stork, pelican, teal and tern. The migration of these birds is an extraordinary sight that adds to the beauty of this district. One can visit the mangroves from Thanjavur (81 kms), Thiruvarur (60 kms), and Nagapattinam (70 kms). The best time to visit Muthupettai is from November to February.

Muthupet (mullipallam) Lagoon is a spectacular natural creation, which is 8 km from Muthupet town and can be reachable only by boat. The lagoon is shallow with the average of 1m depth. The bottom of the lagoon is formed of silt clay substratum. The tidal fluctuations can be observed well with the exposure of oyster beds and roots during low tide. This fluctuations play major role in dispersing the mangrove seeds and forming dense forests. The islets are found on western sides which are submerged during high tide.

The mangroves have grown close to water level in lagoon side but not in seashore. The reason may be the difference in the nature of fine clayey silt deposition that carried by the rivers. The Salt Marshes are found as under herb as well as lining the inner side of the forest.

In the degraded central part of the mudflat, the soft fine silt is found only around the salt marshes. But, the remaining barren ground is hard (clay) which may due to the erosion of surface silt by wind or floodwater. 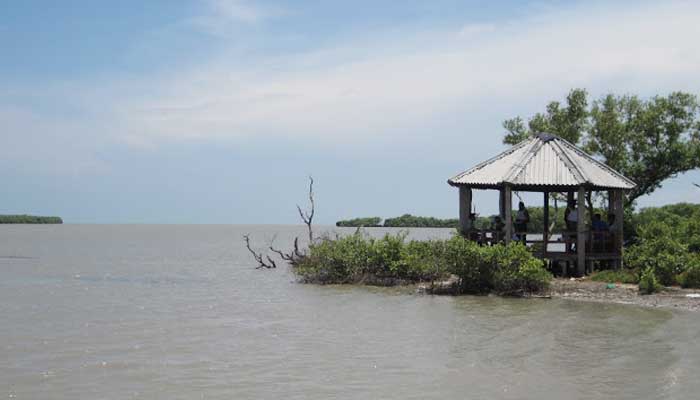 Each main canal which enhances the water movement between sea and lagoon has several sub canals on either side with a substantial number of mangrove seedlings. The western side is not straight. A protruding land pocket has formed an islet like structure. This part of the lagoon lies near to Koraiyar river mouth with small mangrove patches. 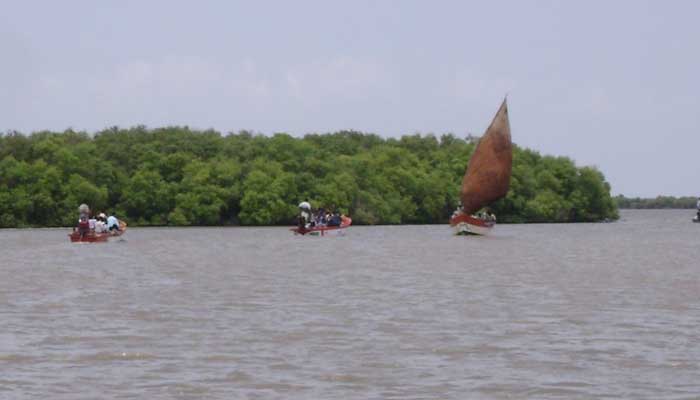 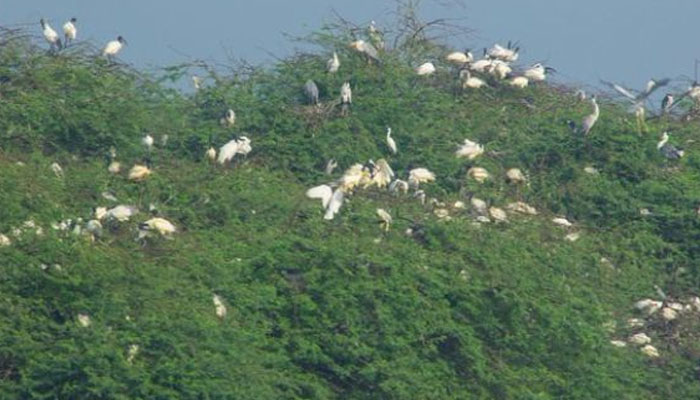 Another recent study recorded 57 species of fishes. Fish distributions and abundances may also change on dial and seasonal cycles. Fishes in mangroves are important predators on amphipods, isopods, shrimps, nematodes, insects, gastropods, other fishes and algae.

For administration and Management purposes the forest department divided the Muthupet mangrove wetlands into six reserve forests. Each reserve forests (RF) embodies different categories of wetland such as healthy mangroves, degraded mangroves, Lagoon, tidal creeks and Creeks. The total area of the Muthupet Mangrove is about 12020 ha. Out of 12020 ha, healthy mangrove forest found only 1855 ha (15%). Whereas, degraded mangroves cover an area of about 7180.62 ha (60%). The area occupied by Lagoon and other water bodies is about 1700 ha.

The northern and western borders of the lagoon are occupied by muddy silt ground which is devoid of mangroves. During monsoon season these mudflats are prone to floods. Many of the Drainage Arteries of the Cauvery delta namely, Nasuviniyar, Pattuvanachiyar, Paminiyar, Korayar, Kilathangiyar and Marakakoraiyar empty their water into Muthupet mangrove wetlands. And in the south it is bordered by Palk Strait. The mangroves beyond Muthupet lagoon are discontinuously found along the shore and extended is up to Point Calimere. 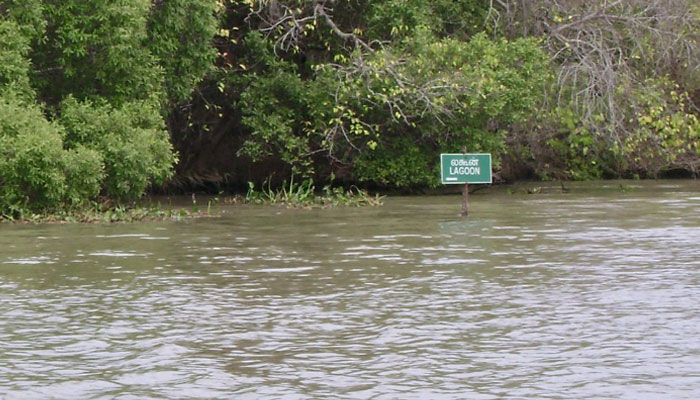 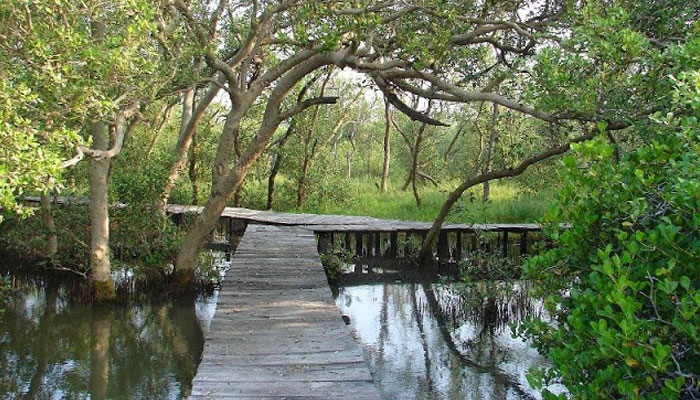 This lagoon is a shallow brackish water body, with an average depth of about 1 to 2 feet during the low tide and 3 to 4 feet during the spring high tide. The lagoon connected to the Palk Strait by a wide mouth of about 1.5 km. Number of tidal creeks, channels and small Bays, bordered by thick mangroves are also found within the wetland. The average salinity of the water, particularly in the lagoon shows wide variation. During monsoon the salinity varies from 5 to 15 ppt and in summer it reaches as high as 45 ppt, which is mainly due to the shallowness of the lagoon. The salinity is the major environmental factor, controlling zonation of Muthupet mangrove forest.

Southern side (mud flat) separates the lagoon from adjacent sea that also leaves a permanent mouth of lagoon with seasonally opened shallow waterways. The width of mudflat is increased from lagoon mouth to the eastern direction. The mudflat looks like a desert in summer, but the presence of dead gastropods under the surface soil layer and the erosion of soil at the centre of mudflat reveal the submergence of mudflat during flood. There is a difference between the lagoon shore and seashore of the same mudflat, in the aspect of distance of mangroves from fluctuating water level. 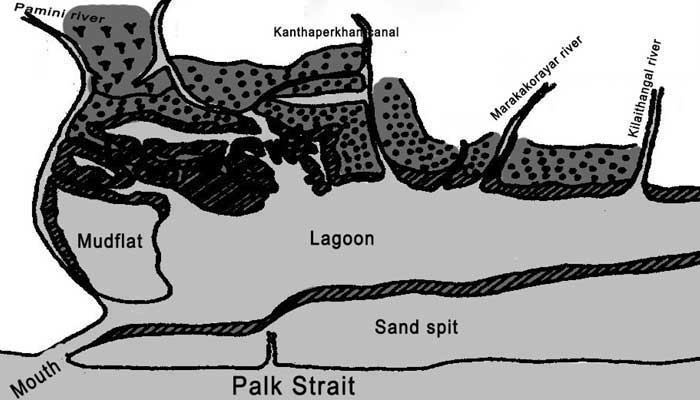 Apart from the saltpan, a total number of 27 prawn farms are also located close to mangrove forest. The total area of these farms is about 580 acre. Out of this, 376 acre is located on the Eastern side.

About 14 saltpans, occupying area of about 4082 acre are present around the Muthupet mangrove wetland. Most of the saltpans are located very close to the Palanjur Reserve land, Tamaram kottai, Maravakkadu.

Muthupet is famous for its coconut and fishing as well as Aqua Farms. The ancient occupation of the people is fishing.

During the Monsoon Season – November to January is the best time to visit this place. Early morning is the preferred time to enter in to Muthupet Forest, when the birds and fishers are busy in the canals. An umbrella is essential, even if you have a hat.

This will prevent the UV in mid-day in the hot creeks while returning. Bring a plenty of water (don’t throw any bottles!!!), fruits and biscuits as you will be hungry. You can eat the food anyone of resting huts, constructed by Tamil Nadu Forest Department.

The nearest airport is Tiruchirappalli airport which is (138 Kms) from Muthupet Lagoon.

Muthupet Railway Station is on the Karaikkudi – Thiruthuraipoondi line. 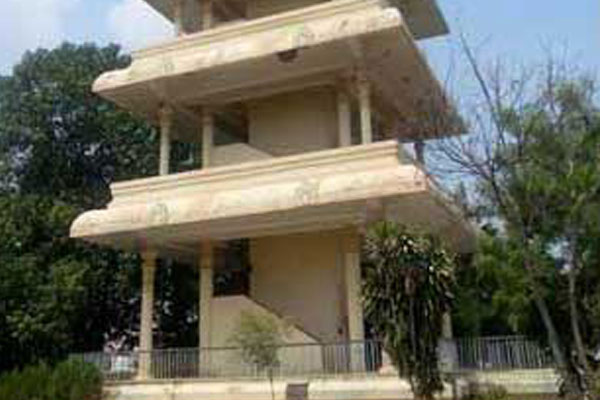 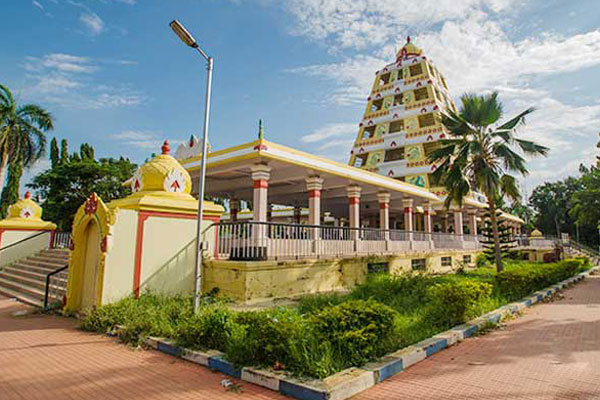 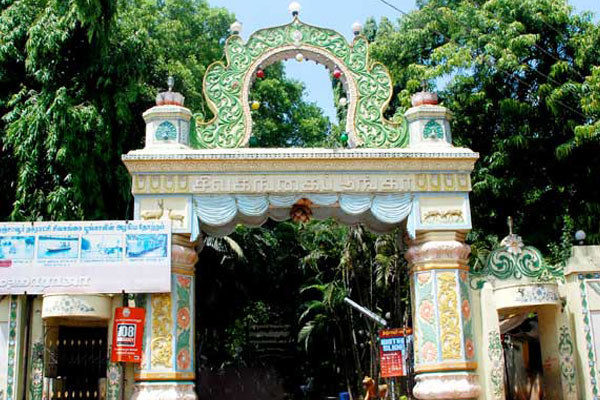 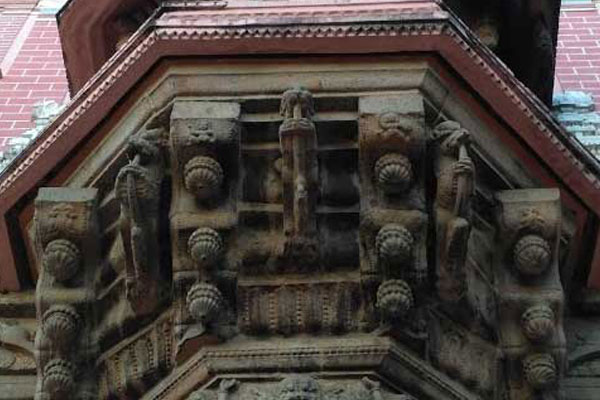 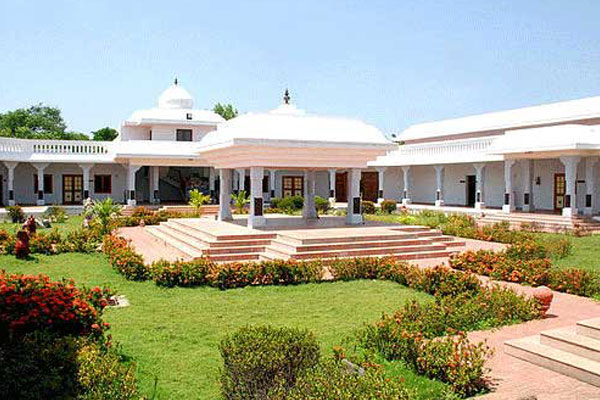 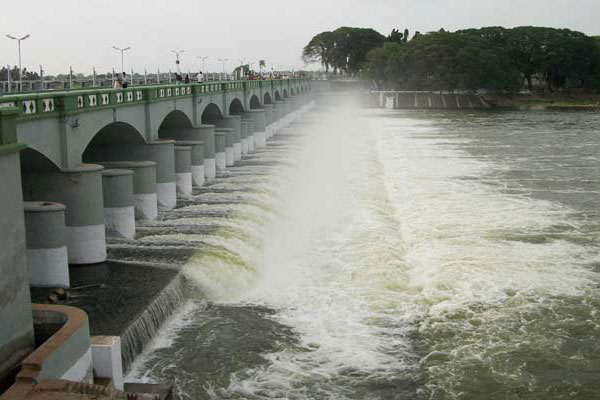 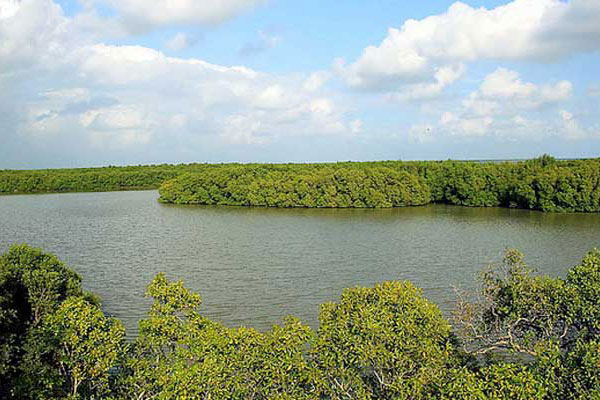