Kumbakonam is one of the ancient temple towns and among the top tourist places in India, flanked by the two rivers Cauvery and Arasalar, in the Thanjavur district of Tamil Nadu. The name Kumbakonam means the Pot’s Corner. According to mythology, when the world was destructed due to the tsunami, Lord Brahma asked Lord Shiva, from where he can restart creation. He suggested him to make a magic pot with the sand collected from various sacred places and float it in the floodwater. Kumbakonam is the place where the pot stopped and then Lord Shiva shot an arrow, which led to the spilling of some nectar on this place, and thus life was revived on the earth.

Once ruled by kings, Kumbakonam rose to be a prominent city between the 7th and 9th centuries AD. The town reached the zenith of its prosperity during the British Raj and was named Cambridge of South for being the prominent center of European education and Hindu culture.

Kasi Viswanathar temple is in the heart of the city and is very close to the famous Mahamaham Tank. As one of the top religious sites, it is dedicated to Lord Shiva. This 72 feet high temple was established in the 16th century. The deity here is called Kasi Viswanathar and his wife as Visalakshi. There are other shrines as well. As per the Legend, Lord Rama and Lakshmana prayed here to Lord Shiva and got a blessing to slay Ravana. You will also find 9 rivers known as Nava Kannigas, who prayed to Lord Shiva at Varanasi to absolve them of sins washed away by bathers. The Lord asked them to take bath in the Mahamaham tank and pray to Lord Adi Kumbeshwara.

Mahamaham is a famous festival conducted once in 12 years. People gather in large numbers to take a holy dip in the tank which is believed to wash away one’s sins and purify the soul. Another festival Masi Magam is the most important festival celebrated during the month of February-March. 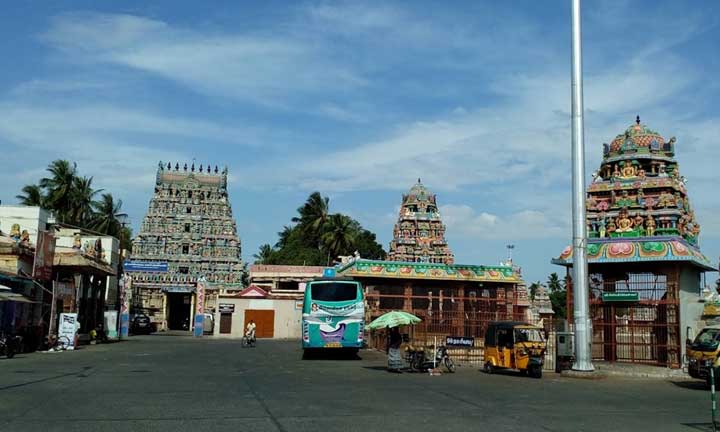 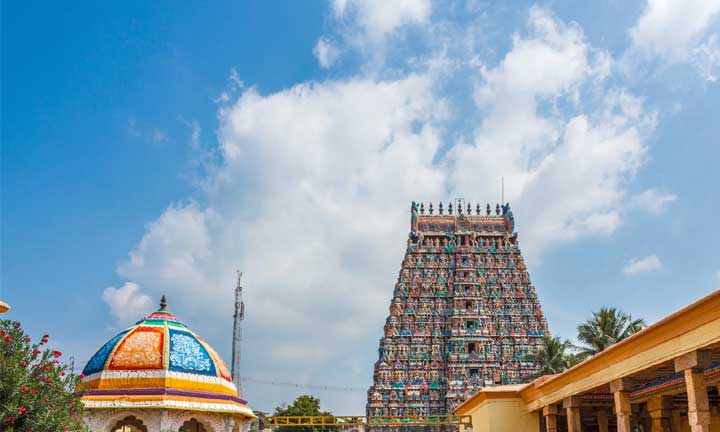 Built during the Chola dynasty in the 9th century, this temple is dedicated to Lord Shiva, The Lingam here is broad at the bottom and narrow at the top in the shape of a needle. This Lingam is believed to have been made by Shiva himself. Lord’s consort Goddess Manthrapeeteswari Mangalambika shrine is situated to the left of Kumbeswarar shrine.

The Kumbeswarar Temple is an architectural marvel which reflects the typical Dravidian style. It is one large temple with 9 stories and a height of 128 ft.

The unique feature of this temple is the 27-star sign and 12 zodiacs that are carved from a single large block of stone which speaks volumes about the engineering skills of the yesteryear masons. Other shrines of Ganapati, Muruga and Kiratamurti are also present in this temple.

Built by Aditya Chola in the 9th century, Nageswaran Temple is known for great architecture, building technology and astronomy. This beautiful kumbakonam temple is built in such a way that it allows sunlight to fall on the idol only during the months of April or May for three days therefore popularly known as Surya Kottam Temple. Temple is crowded on these 3 days with devotees from all over the world to seek blessings of the deity.
This temple is one of the religious sites dedicated to Lord Shiva, the serpent king. It is believed that the temple got its name Nageswaran, as one serpent was found worshipping the lingam. 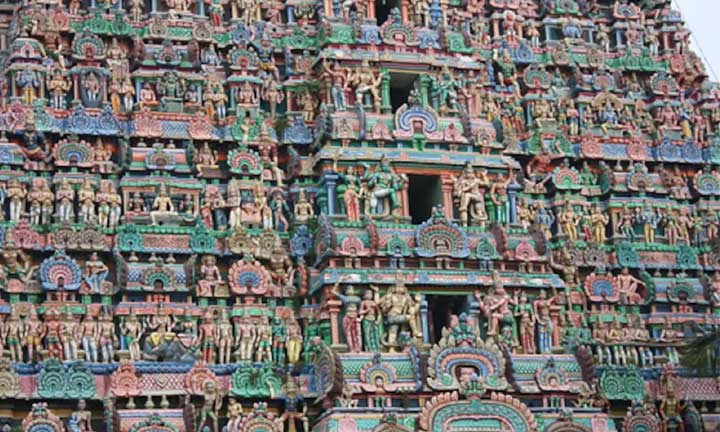 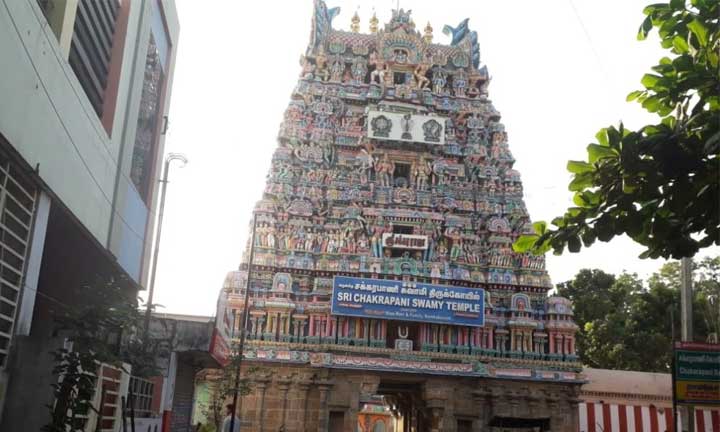 Devoted to Lord Vishnu, this temple is named as Chakrapani Lord Vishnu and appears in the form of a discus or Chakra.

According to legend, Lord Vishnu sent Sudarshana Chakra to Patal Lok to kill the demon Jalandasura and have come out through river Cauvery. God Brahma, who was taking bath in the river, got impressed and installed Sudarshana Chakra here. There is a bronze idol of King Serfoji II worshipping the Lord; who was cured of illness. It is believed who are mentally or physically weakened by illness or problems can be cured here. The Sun God worshipped Lord Vishnu here and therefore those facing problems due to planetary movements in their life or Shani, Rahu and Ketu Dosh are advised to pray to Lord Chakrapani.

This is among one of the Vishnu temples which takes part in the Mahamaham festival.

This temple is one of the religious sites that are a part of the UNESCO World Heritage Site, built in the 12th century by Rajaraja Chola II. The deity’s consort, Periya Nayaki Amman, has her temple situated near this temple. It is known as a storehouse of art and architecture with a vimana of 85 feet high and front mandapam of a huge chariot and some exquisite stone carvings.
As per legend, Airavata, the white elephant of Indra and King of Death, Yama, worshipped Lord Siva in this temple. 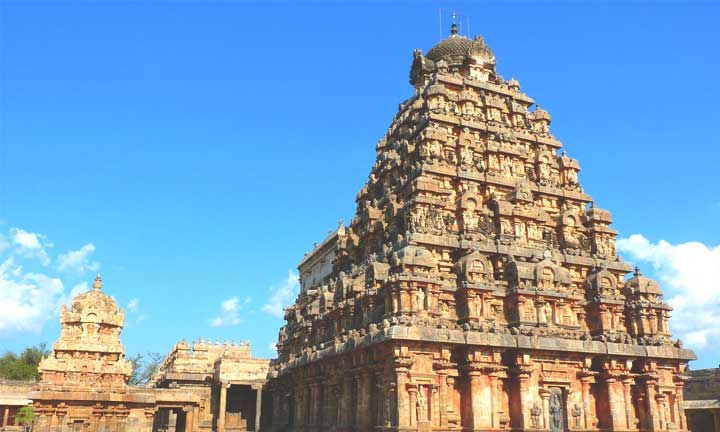 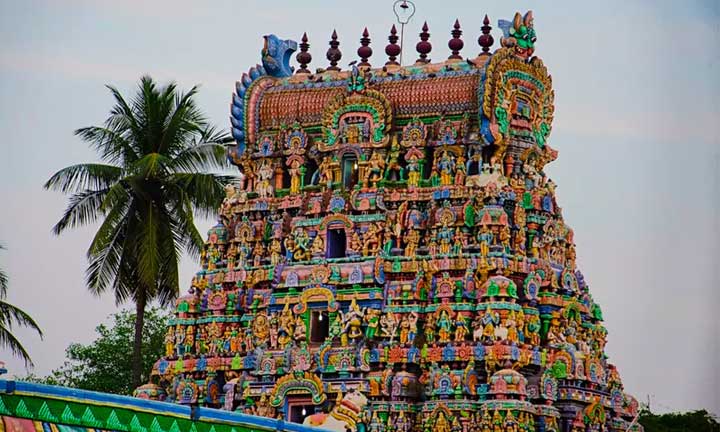 Dedicated to Lord Vishnu, it derives its name from the Sanskrit words Sarangam which mean ‘Bow of Vishnu’ and ‘Pani’ meaning hand. Being the tallest temple tower in Asia with 12 story Gopura of 150 feet, this is one of the top religious sites built by the Nayak Kings in the 16th century.

The central shrine of the temple is in the form of a chariot in heaven drawn by horses and elephants. The deity is shown in a posture as if he is getting up from a reclining position. The temple boasts of 5 prakaras and a holy tank which is known as Porthamarai Kulam. It is considered that Goddess Lakshmi arrived here from the Potramarai tank with thousand lotuses.

The chariot festival held in the spring season is an important festival of this temple. Sarangapani Temple is the biggest Vishnu temple in Kumbakonam and third of the 108 Divya Desams.

It is considered 60th among the 108 Divya Desams dedicated to Lord Vishnu and is one of the major religious sites in Kumbakonam. The temple is believed to be constructed by the Medieval Cholas in late 8th century AD. According to mythology, The Lord took the form of an old man and asked from Markandeya his daughter Bhoomidevi’s hand for marriage. Markandeya said that his daughter was too young and can’t cook food and does not even know how to use salt in cooking. To this, the Lord said that he would eat food even without salt and Lord Oppilliappan got married to Bhoomidevi here. Hence the temple name is Uppiliappan and salt is never added to the prasad cooked here.

Lord Vishnu is worshipped as Uppiliappan and his consort Lakshmi as Bhoomidevi. You can see the 8 feet tall idol of the Lord with Bhoomidevi on the right and Markandeya Maharishi on the left. The lord is also known as Lord Venkateshwara’s brother and so those devotees who are unable to visit Tirupati to fulfil their promises can go here.
Brahmotsavam is grandly celebrated in the temple during the months of September-October. 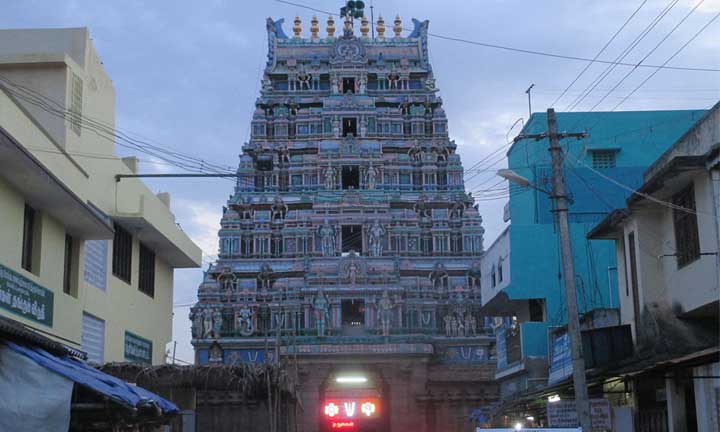 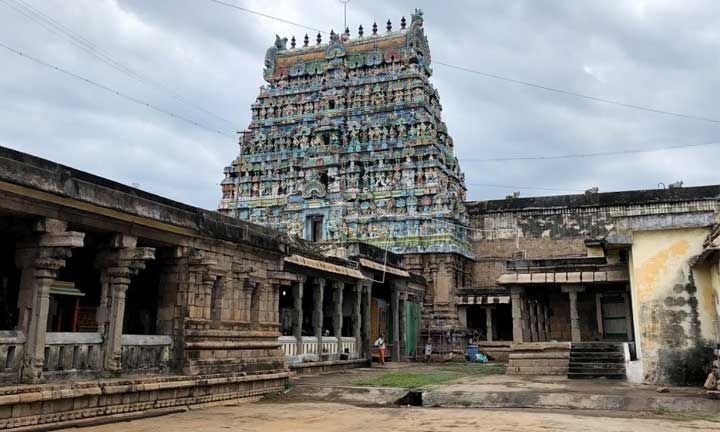 The Shiva Lingam here is a swayambhu (self-manifested) and therefore a large number of devotees can be seen here all year round. Shiva appeared in the form of a flame to please Agastya and other sages who were performing penance; hence the deity is named as Jyothirmaya Mahalingam. The Ambal Shrine is one of the Sakthi Peetams and is on the right side of the main shrine. There are 5 tanks and 27 other water bodies that are associated with the temple, which is one of the most interesting religious sites.

Known as the southern Ayodhya, This temple is dedicated to Lord Rama, an incarnation of Lord Vishnu, constructed during the 16th century CE. The temple has some of the famous stone carvings and 219 wall paintings, which explain the series of incidents from the great epic Ramayana. This is the only temple where we can see idols of Rama, Sita and Lakshmana along with Bharatha and Shatrughna and Hanuman.
Rama Navami is celebrated in a grand manner. This is also one of the five Vishnu temples that are connected with the Mahamaham festival. 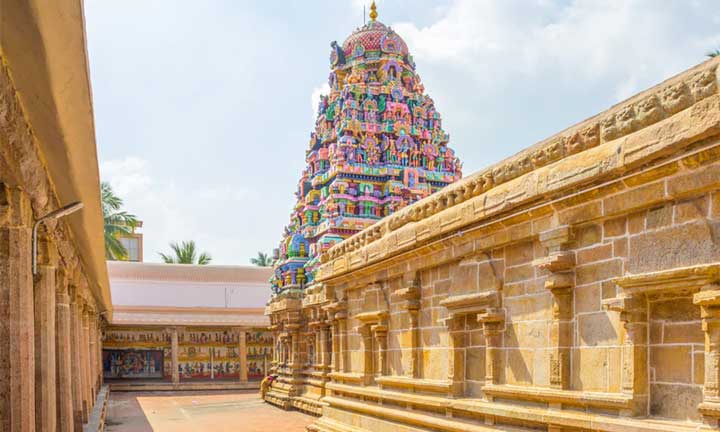 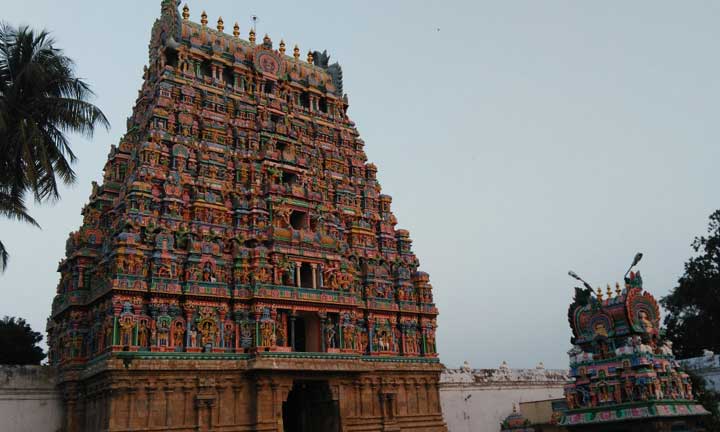 It is one of the biggest temples and most important religious sites dedicated to Shiva but the most famous deity in this temple is Goddess Durga, a guardian deity of this temple. The temple is famous for many mythological stories.
According to legend, the divine cow Kamadhenu’s daughter Patti is said to have worshipped Lord Shiva here. Sage Viswamitra got the title of Brahma Rishi at this place. Sri Rama is said to have worshipped Shiva here to absolve himself from sins.
It is said that God Shiva asked Nandi to move aside so that he can see Sambandar when he comes to this temple. This is why Nandi is not seen in a straight line facing the sanctum sanctorum.

The well called Koti Theertham was created by Lord Rama and is considered to be equivalent to Dhanushkodi near Rameswaram. This temple attracts devotees who have Rahu and Kethu dosh.

The annual ten-day festival held in December-January, Vaikasi festival, Navarathri and Muthu Pandal Festival are the important festivals celebrated at this temple.

Suryanarayana Temple is one of the Navagraha temples dedicated to Surya and his two consorts, Usha and Prathyusha. Shrines of other eight planetary deities are also present.

According to the legend, Sage Kalava was suffering from leprosy and prayed to the Navagrahas. Pleased by his devotion, they cured him, and after seeing this, Brahma got angry, as nobody had the right to change destiny. Brahma cursed the nine planets to suffer from leprosy. These nine planets asked Lord Shiva to cure them. Lord Shiva cured and blessed them so that they can help those who pray to them with full faith and devotion.

Rath Saptami and Vijayadashami are celebrated with great devotion in this temple. 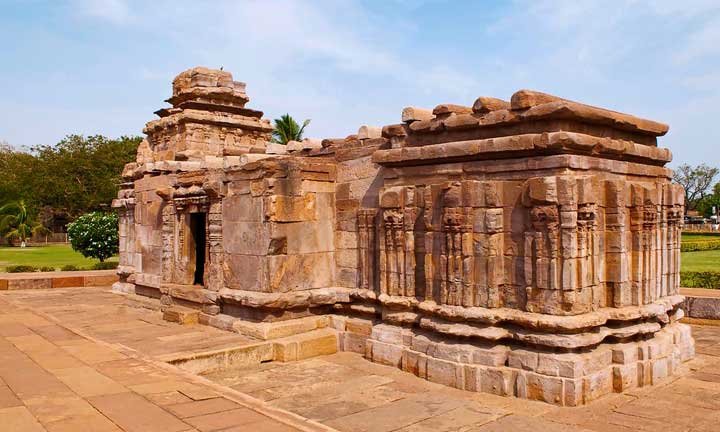 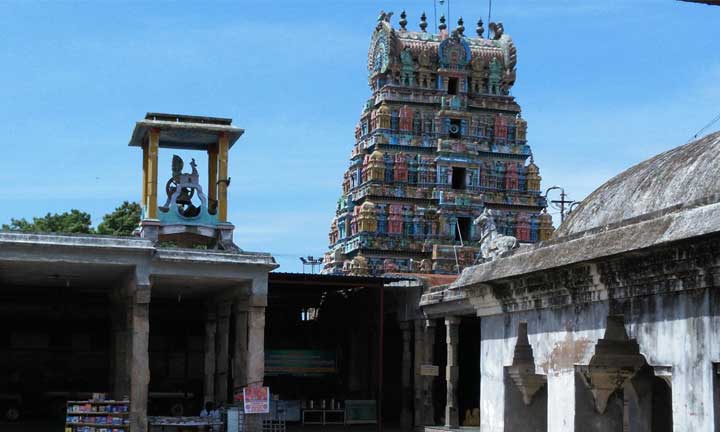 Kanjanur is one of the nine Navagraha located in the Cauvery region dedicated to the planet Venus, called Sukran. The place is famous for many reasons. Shiva’s marriage with Parvathi had taken place here. Agni is said to have worshipped Shiva here.

The oil Abishekam poured on the main Shiva lingam is absorbed by the idol which is in itself a miracle. Sukran is a powerful planet and worshipping it on Friday is considered very auspicious.

It is one of the 9 Navagraha temples in Kumbakonam especially dedicated to Rahu. The temple has a separate shrine also. Here Rahu is seen with two consorts Nagavalli and Nagakanni. Rahu worshipped Lord Shiva here and got relieved of a curse. A unique feature of the temple is that Rahu Bhagawan is seen with a human face, as mostly he is seen with a serpent face.

It is believed that those who are suffering from dosha of delay in marriages, childlessness, troublesome married life and Kalasarpa Dhosa can be cured by doing milk abhishekam. The unique thing is that the milk when poured over the idol turns blue, which is clearly visible. 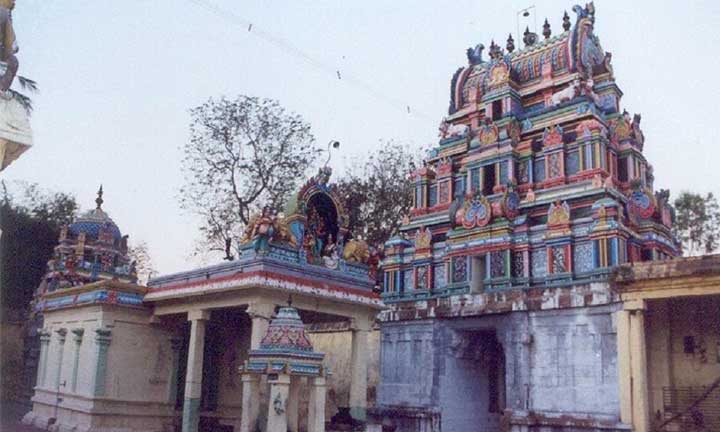 The Shiva Lingam here is a swayambhu lingam. The miracle is that the colour of the deity changes 5 times a day.
It is said that during Shiva-Parvathi wedding in Mount Kailash, the place caved due to the presence of all the gods. To balance the level of the earth, Lord Shiva sent Sage Agasthya to the South. He was disappointed as he could not witness the marriage. The sage installed a lingam behind the main lingam in the temple to worship Shiva, and pleased with his worship, the Lord with his wife, appeared in front of the sage and married again here at this holy place. The unique thing about this temple is you can see all three deities Brahma, Vishnu and Shiva here.

The nearest airport is Tiruchirappalli Airport which is (104.8 Kms) from Kumbakonam.

The nearest railway station is Kumbakonam Railway Station which is (1.3 Kms) from Kumbakonam Bus stand.