At a distance of 36 km from Trichy, 39 km from Thanjavur & 42 km from Pudukkottai, the Malayadipatti Rock-Cut temples are situated on granite hillocks, south of the Malayadipatti village, also known as Thiru Valattur Malai. It is one of the famous places of heritage in Tamilnadu, and among the best places to visit as part of Trichy tour. There are two temples in Malayadipatti, one for Lord Shiva and the other for Lord Vishnu. Both temples are situated on the same hillock. Built in the 8th century by Pallavas, the Shiva temple is older than the Vishnu temple. Constructed by Kuvavan Sathan, the Shiva temple is named Vakeeswarar, according to epigraphic notes. This temple, popularly known as Alathurthali is situated towards the eastern side of the granite hill. Among the most prominent tourist places, this temple consists of a rock-cut mandapa. The sanctum is built on the eastern end in a cubical form cut inside the mandapa. In the later period, a compound wall enclosing the cave and the front mandapa were built. The pillared mandapa has statues of Ganesha and Muruganalong with Nandi. The entrance gateway is guarded by figures of dwarapalakas. There is also a Shiva Lingam that is cut from the main rock face. There is a Saptamatrika panel placed between sculptures of Veerabhadra and Ganesha. The Vishnu temple is popularly known as Olipathivishnu Vishnugraham, located closer to the western end of the hillock. The rock-cut Vishnu temple includes numerous sculptures, painted stucco, and painting on walls and ceiling. The 15 ft Moolavar is a beautifully carved image of Lord Anantha Padmanabha in a reclining posture. The rock-cut temple contains a mukha-mandapa, Ardha-mandapa, and the sanctum. Almost the entire inner surface is adorned with paintings, sculptures, and stucco work. There is a sculpture of Lord Vishnu and Lakshmi. There are figures of Shiva, Narasimha, Brahma, and other gods and deities. This entire sculpture is painted and covered with stucco. These artworks appear to be made during the 16th – 17th century AD. On the western wall of mukha-mandapa, Vishnu is shown in a seated position together with his consort. Another wall is covered with large relief showing reclining Vishnu with Brahma sitting on a lotus Accompanied by Gandharvas. There are figures of demons inside the rock-cut temple as well. There are paintings on the ceiling that depict the incarnations of Vishnu, the Dashavatara. There is also a flat-roofed structure, decorated with carvings of elephants and birds along with figures of mythological creatures. The Vishnu temple and cave contains 10 inscriptions dating back to 960 AD. There are 3 other caves from the 3rd – 4th century that housed Jain monks. There are several ancient sculptures found in 2 caves. Another cave has a white painting of a human and a bird probably made out of lime.

Shiva temple is located a little higher than Vishnu temple, closer to the eastern end of a hillock. Malayadipatti Shiva temple is called Alathurthali. According to inscription this temple was excavated in 804 AD. Temple consists of rock-cut mandapa. At the eastern end there is sanctum sanctorum of cubical form cut inside the mandapa. In later times there has been built compound wall enclosing the cave and the front mandapa. Mandapa contains four pillars – two rear pillars are connected with arched brickwork with sculptures of Muruga and Vinayaga behind, on a raised platform. Cave portal contains two pillars and two pilasters, it is 4.64 m wide. Mandapa is 6.70 m long in the north-south direction and 4.58 m wide. It contains a sculpture of Chandeshwara, in the middle, there is 1 m long sculpture of Nandi ox facing the sanctum. Nandi sculpture is not cut of mother rock, it is resting on a platform of large stone blocks. Entrance in the shrine is guarded by sculptures of two dvarapalas – guards (Mazhuvadiyar and Tirisulakar) resting on heavy clubs. The floor of the shrine is 2,11 x 2,10 m large, height is 1,90 m. The shrine contains lingam which also is cut out of mother rock. South wall of mandapam contains 3.15 m wide Saptamatrika panel showing 7 goddesses sitting between Ganesha and Veerbadra. West wall is adorned with a group of deities – Muruga, Sankaranarayana and the lion vehicle of Korravai in the center. Unfortunately, this panel is damaged by vandals. 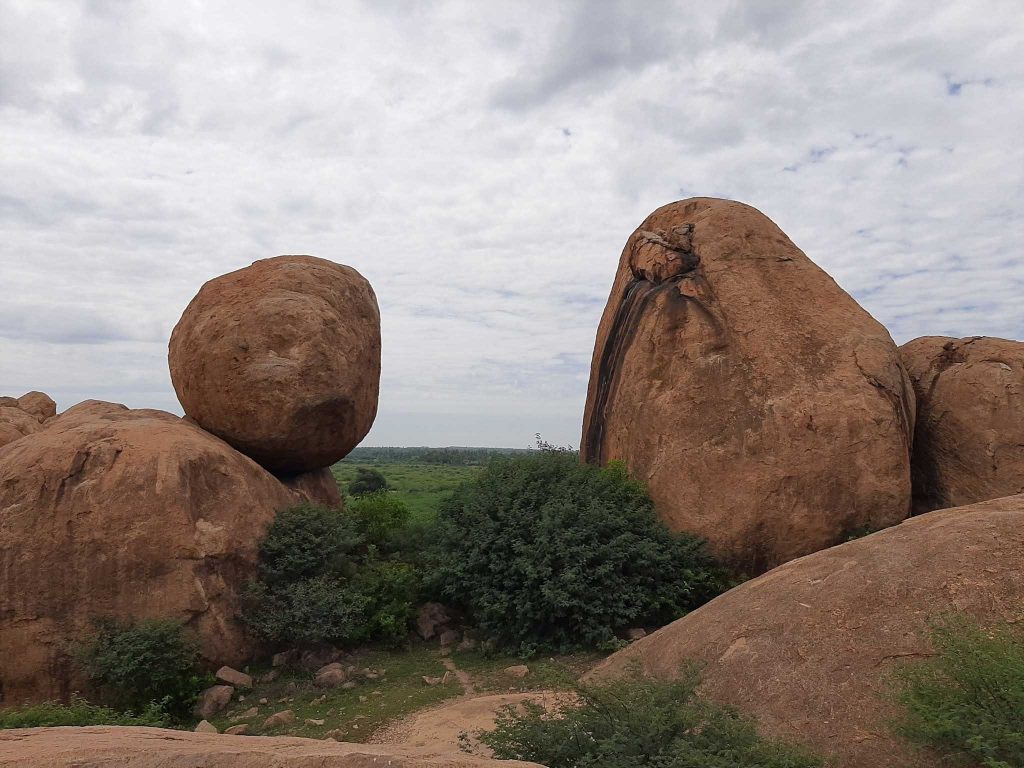 Vishnu temple is located closer to the western end of the hillock. Malayadipatti Vishnu temple is called Olipathivishnu Vishnugraham. Over the centuries-long history of this temple, it has turned into complex of several structures. The rock-cut temple contains a huge amount of artwork – beautiful reliefs and sculptures, often covered with painted stucco. Paintings cover walls and ceiling. The presiding deity of this temple is Perumal, popular another name of Vishnu in Tamil Nadu. Temple though contains many more shrines for Vishnu, Shiva and other deities. Rock-cut temple itself consists of mukha-mandapa (verandah), ardha-mandapa (entrance chamber) and sanctum sanctorum (the main shrine). The ancient temple is entered through a row of two square pillars and pilasters at each side. Nearly whole surface inside the temple is covered with sculptures and reliefs, stucco and paintings. One wall is covered with a sculptural group showing the presiding deity – Kanniraintha Perumal (Vishnu) together with his consort Lakshmi (Nachiyar). Vishnu is holding a sangu (sacred conch) and chakra. They are joined by Brahma and Shiva as well as Nrsimhadeva and various other murtis (divinities). This relief is covered with stucco and painted. While the rock-cut cave has been made in the 8th – 9th century AD, stucco and paintings seem to be much younger – from the 16th – 17th century AD. On the western wall of mukha-mandapa Vishnu is shown in seated position together with his consorts – this relief is not cut in the main rock but fitted of three large separate stones. Another wall is covered with large relief showing reclining Vishnu with Brahmadeva in attendance above, sitting on a lotus. Gandharvas are flying around the head of Brahma’s head. This relief is cut from the cliff itself. Temple contains many more sculptures of different deities, for example, one wall is decorated with two large images of the demons Madhu and Kaitabha. There is shown also goat-faced Thakkan. Ceiling is covered with beautiful paintings of the Dashavatara – ten incarnations of Vishnu. In the front of the cave temple there are stone reliefs showing three Azhwars and Vishvaksena – considered to be commander-in-chief of Vishnu’s army. Rock-cut temple is the oldest part of Shiva temple but in later time the front part of the cliff has got additions. There is built wall enclosure of large stone blocks. It is entered through a gate tower – gopuram. This structure is flat-roofed and ornamented with carvings of elephants, birds. At four corners there are projecting four makaras – mythological creatures comparable to chimeras. Wall enclosure extends from both sides of gopuram and extend up to the cliff monolith to the south. Eastern wall separates both rock-cut temples. Outside the gopuram entrance, to the left there is a sculpture of Ganesha sitting in a niche facing towards the north. Many deities in the temple were made of destructible materials – stucco-covered wood or stone. Thus there were made and installed additional murtis of resistant material – metal or stone – which serves for daily rituals. Vishnu cave contains 10 inscriptions. The earliest is made sometimes around 960 AD but it is not foundation inscription – thus the cave is older.

The nearest airport is Tiruchirappalli Airport which is (31.4 Kms) from Rock-Cut Temples

The nearest railway station is Thanjavur Railway Station which is (40.9 Kms) from Malayadipatti Temples.